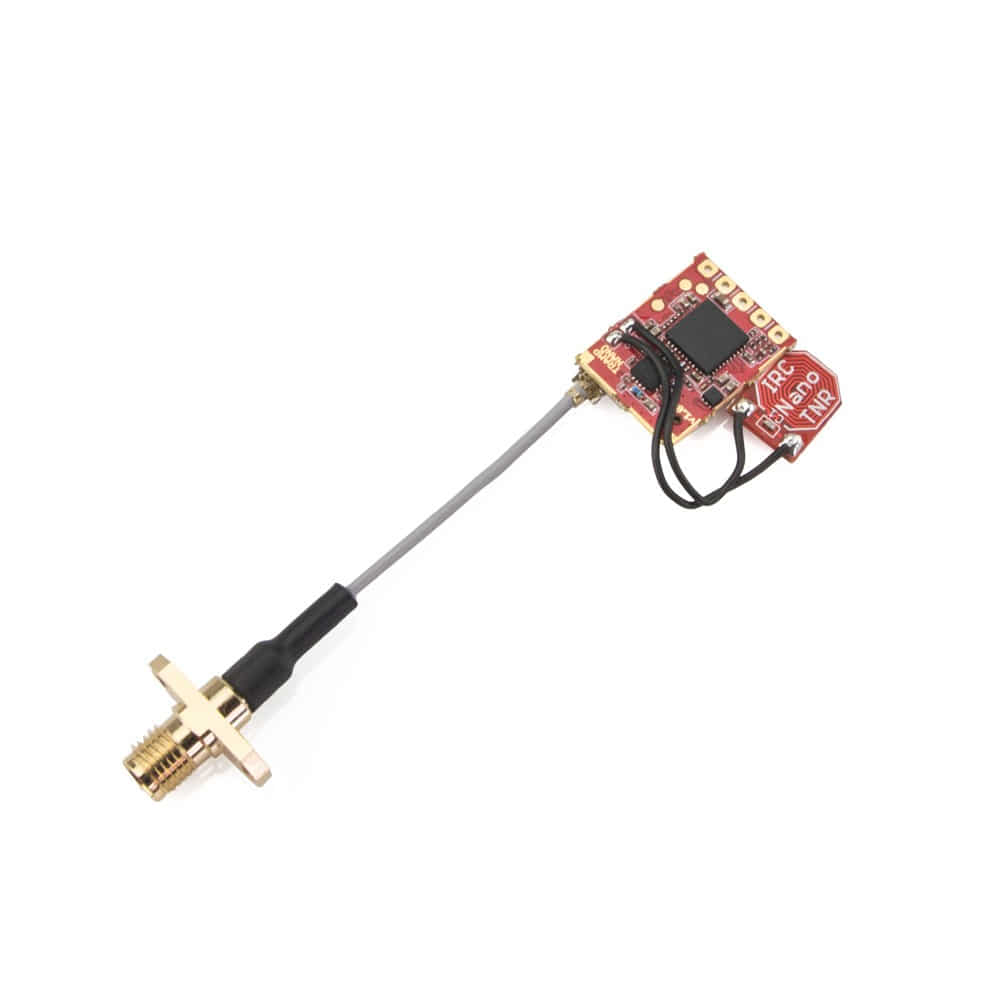 Discounted amount of your subtotal will appear when you place your orders.

The ImmersionRC Tramp Nano 5.8GHz Video Transmitter. Highest Power in a Tiny Package
Only 18x13mm, and weighing in at a paltry 1.01g, the Tramp Nano packs quite a punch. Given adequate airflow,
output powers of >500mW (typically 700mW+) are emitted.

which avoids overheating transmitters on the starting grid, or after an unexpected landing with lengthy recovery

(also with the advantage of saving precious battery power while transmitting a signal for recovery).

The Nano operates from the 5V regulated supply that most flight controllers supply these days, and doesn’t require a dedicated connection to the flight battery.

An elegant solution to a frustrating problem. The Tramp Nano, with it’s supplied U.FL to SMA cable,

supports a locking U.FL connector that locks the connector onto the board without the need for screws, or tools.

Included with every Tramp Nano is a lightweight 20 x 20mm carrier PCB, with IRC gummies, suitable for M3 screws.
Three touches with the soldering iron, and the Nano is soldered into place, without the need for header pins.
Included silicone ‘gummies’ protect the transmitter against the extreme shock of collisions common in FPV racing, and freestyle.
The carrier PCB also acts as a heat sink, allowing higher powers to be used for longer time periods.

We have all experienced long delays at the starting grid before starting a race.

No airflow over the electronics and video transmitters overheating.

Most video transmitters (even the higher end units) have no thermal protection whatsoever and will happily cook themselves and prematurely fail.

The Tramp family is a little different. It constantly monitors the temperature of the Tx,

and gracefully reduces power output to increase battery life and protect the transmitter.

As soon as the props start spinning, it detects the temperature reduction and quickly boosts power output.

Touch’n’Race, a patent-pending technology which helps both the casual racer, and race directors alike.

Transmitters are placed in Race mode upon arrival at a race event, and remain in that mode until the event is over.

Race directors can, without powering up a model, define the frequency and power output of the transmitter, in 5 seconds flat before a race starts.

As soon as the race is over, and the battery disconnected, the TrampHV reverts to it’s race-director defined mode.

and races which start and finish on-time (a rarity in the world of drone racing today).

More importantly, the chances of a race being disrupted by an accidental power-up in the pits are eliminated, a dream for race organizers.

Why let race directors have all the fun?. The personal TNR wand avoids dip-switch hell even in the local park.

Touch-free programming of video transmitters before you launch,

eliminating frequency collisions, eliminating the ‘what channel was I on last’ question,

and allowing power levels to be modified between flights to adapt to local conditions.

Note that the wand is not required to operate the transmitter.

As with its big brother, the Tramp HV, the Nano is fully controllable using the same ‘Tramp’ protocol supported by all of the main Flight Controller firmware.

Additional commands eliminate the need for a ‘pit switch’, since the vTx can be completely shut down from the Flight Controller.

Every member of the Tramp family ever shipped has been factory calibrated to ensure precise power outputs,

No more cross-talk from 25mW transmitters which are instead emitting 200mW!,

or worse, 25mW transmitters which emit much lower power levels.

Please take into consideration that we only accept qualifying returns but not exchanges. Refunds are issued once the returned products clear our inspection.

1) An item is eligible for cancellation if:
-you posted a Return request within 24 hours of payment and your order is still under “Pending” status (if your order is under “Queued for Shipment” status, please contact our customer service center) or
-the order is delayed for more than 10 days since payment and you have not received any notification regarding the delay; or
-the ordered item is out of stock.

-you receive a product different from your order; or

-you receive a defective product.

(1) Post a return request on our Return forum within three days of receipt. You are required to attach the photos of the received product(s) and include the item code, the order number, and the reason for the return.

(2) A customer service representative will be in contact to assist you by email or phone.

(3) Items returned must be in their original condition, which includes tags and any packaging. Also, you need to include a note of your order number, name, and user ID.

*Please be advised that returns are accepted ONLY IF you followed the instructions above and your return request has been approved by our staff. Returns that are shipped to us without any prior consent are not accepted.

*Please note that EVEN the defective/incorrect item(s) must be returned with all of the tags and labels intact. The item(s) must be sent in their original packaging and unworn.

*Please include all contents of the original package and free gifts (if applicable) in your return packaging.

* Shipping fee for any return caused by our fault will be paid by the company. However, if EMS’ cash on delivery is not possible then you can scan the return receipt and either mail it with the item to return or post an image of it on the forum. The shipping fee will be refunded once the returned item has arrived.

-you are returning the items just because you changed your mind (on size, color, etc.)
-you are returning shoes, bags, or any other accessories
-the products are damaged due to your mishandling
-your return request is not approved by our staff

The following items are not considered defective:

4) If there is a missing item from your order:

*Contact our customer service center by phone or by forum (if you cannot reach us by phone) within 1 day of delivery.
*Please keep all contents of the original package including packaging material (boxes, plastic bags etc.) with you until you are instructed otherwise.

Please note that we may not be able to process the refund for your missing item if you lose or damage any packaging material.

There are no posts to show

There are no posts to show

This window will automatically close when payment is processed.
Do not close this window until processing completes.

CHOOSE YOUR COUNTRY OR REGION